Question 1 : Identify the Veteran Nadaswaram Vidwan in the picture given below.

Dr. Sheikh Chinna Moulana saheb
Popularly known as Sheikh was a leading exponent of Nadaswaram in Carnatic music. Born in Andhra Pradesh in an illustrious family of great musicians, Sheikh had a great lineage of Nadaswaram running in his blood.
He got inspired by great musicians like Sri Rajaratnam Pillai (whom he considered his manasiga Guru) and moved down to Srirangam inorder to learn and master the Thanjavur Baani of Nadaswaram and learnt under various gurus.

He was very well known for his extraordinarily imaginative raga Alapanas (especially Ragam Devagandhari – his favourite) and his Gayaki style of rendition of Kritis.
He is one of the first Nadaswaram Vidwans to travel abroad and perform extensively all over of the globe in various international festivals.

His philanthropic nature made him support a lot of poor families in Srirangam. His house was a place where no visitor was allowed to leave without having a full course meal.

He started his own school of music “Saradha Nadhaswara Sangeetha Ashram” to impart his knowledge to the younger generations. His grandsons’ Kasim-Babu brothers, are holding up his great lineage and are great nadaswaram Vidwans performing extensively in today’s music field.

Question 2 : Identify the raga of the kriti played in the following clip :

Kaikavasi: This raga, known to be a derivative of the 60th Melakarta Neethimathi, is one of the ekaika ragas from Sri Tyagaraja’s big basket. The aarohana and avarohanam of this raga is given as SRGMPDNS- SNPMGRS. Though this is the broad structure, the prayogam, SPMP is observed in the kriti. Similarly, the prayogam, SNDNP, is observed in the arohana krama. The raga svarupa has been aesthetically depicted in the composition, Vachamagocharamae, which has a very beautiful meaning.

Question 3 : Connect the 5 places given in the map below with one great Advaitin composer in Carnatic Music. 1) Nerur 2) Manamadurai 3) Puri 4) Kashi 5) Karachi. 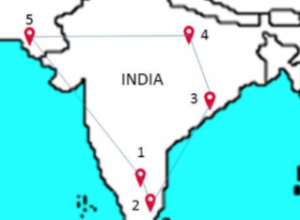 Sri Sadasiva Brahmendra was an Avadhoota purusha. He was a great Advaitin who has innumerable works to his credit, including Atma Vidya Vilasa, Yoga Sudhakara and so on. It is interesting to note that an Advaitin like him has written beautiful kirtanas in praise of God, stressing the importance of Bhaktimarga as the basic means to realise Brahman. He has been a true follower of Jagadguru Sri Adi Sankara.

His compositions are in simple Samskrtam and in kirtana format – pallavi followed by many charanams. Popular compositions include, Manasa sancharare, bruhi mukundheti, pibare rama rasam and many many more. These have been set to tune by the stalwarts of yester years. His mudra is Paramahamsa, indicating that he was a Paramahamsa, highest level attained by a Sannyasi.