Question 1) Connect the images to find a musical concept. 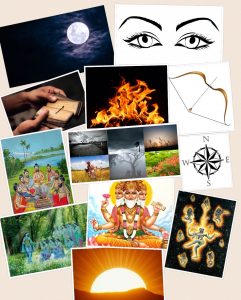 The 72 melakartas were divided into 12 chakras with 6 melakartas each. Each chakra had to be given a name. This was done by connecting the the numbers with a specific physical manifestation. Hence:
1 – 1 moon – Indu
2 – 2 eyes – Nethram
3 – 3 sacrificial fires – Agni
4 – 4 vedams – Vedam
5 – 5 types of flower arrows that Manmatha used – Banam
6 – 6 seasons – Ritu
7 – sapta rishis – Rishi
8 – 8 sons of Ganga who were born before Bhishma and we’re called Vasus – Vasu
9 – Nava Brahmas – Brahma
10 – 10 directions – Dishi
11 – ekadasa Rudras – Rudra
12 – 12 Suns – Aditya
As the numbering and naming is based on the physical manifestations, this system of nomenclature is called Bhuta Sankhya

Question 2) Identify the Composer and his Mudhra from the link below.
https://soundcloud.com/sukrtam-trust/audio-sample-file

While many of the composers of yester years were Vaggeyakaras, there were some who preferred to work together to bring out a masterpiece. Most of them were brother combos. One is not sure about the role each one played but the end result is so beautiful. This being the reason, many a time, the composers are referred to by the ankita/mudra that they used.

Karur (Karuvoor in Tamizh) is translated to Garbhapuri in samskrtam. Thus, the brothers used the mudra, garbhapurivasa/garbhapurisa/garbhapuri nivasa as a samarpanam to the Lord of Karur

They have composed varnams and kritis in the usual format. Sriraga varnam, brova samayamithe(Gowri manohari), rara rama(Bangala) are some of the popular compositions.
The compositions are replete with the raga ranjaka prayogas. The usage of the dhaivatam in only one place in the Sriraga varnam is a testimony to their knowledge of the aesthetics and sastra of music.

Clarionet is a wind instrument which is very popular in western music. In India, it was played in the music bands. Sri A K C Natarajan gets the unique distinction of having adapted this Western instrument to Carnatic classical music. He not only introduced the instrument but plays it as if it has always been a part of the carnatic music scene. Listen to a beautiful Shanmukapriya Alapana by Sangeetha Kalanidhi Sri. AKC Natarajan.

Clarionet was originally spelt with an ‘O’ but nowadays, the spelling Clarinet is also accepted.