Question 1) Identify the musician in the picture. 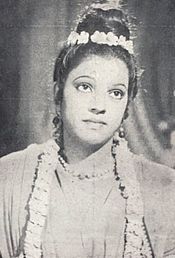 Nagapattinam Chandrasekara Vasanthakokilam, fondly known as NC Vasanthakokilam – the uncrowned princess of music. Blessed with a rich voice and clarity, she made a grand entry into the carnatic music arena by winning the first prize in vocal music at the 1938 annual conference of The Madras Music Academy. She has a vast repertoire of tamil krithis and popularised many of Sri Suddhananda Bharati’s compositions. Some of her favourites included Yen Palli Kondirayya, Mahalakshmi Jaganmatha , NI daya Rada. She also made her mark on the silver screen as an actor and a singer. Some of the movies include Haridas, Sri Krishna Vijayam and Kundalakesi. Her musical career came to an abrupt end with her untimely death at the age of 32. Sukrtam salutes this Nightingale through MusIQ.

Question 2) The importance of Gayatri Mantram is extolled in this Tyagaraja Krithi saying that “it is the heart of the four vedas”. Identify the composition and the Ragam??

In the Pallavi he calls for his mind to sing in praise of the 7 notes in their shining and charming forms.

In the anupallavi, he describes that the Swarams are arising from the navel, heart, throat, nose, tongue and come out as beautiful notes which are incarnations of the ultimate naada.
There are various references to production of sound by the voice. It is not just the vocal chords , that produces sound. It involves various parts of the body like navel , chest , vocal chords, nose etc. This has been discussed in musical treatises. What we now call voice culture or vocalisation has been clearly given by Sri Tyagaraja in this krithi.

In the charanam Sri Thyagaraja describes that the saptaswaras don’t only pervade in crux of the Rig, Sama and the other vedas But also in the very heart of the most sacred verse of the Gayatri mantra.
The Swarams are emulating from the souls of the gods, the godlike yogis and from the saintly Sri Thyagaraja, alike.

Sri Tyagaraja like in many other krithis, talks here about the nadopasana (worshipping through music). “Experience of lord which is obtained by the practice of the Yoga, Dhyana, Puja and Veda Adyayana, can be obtained with comfort and ease through good music” – Voice of God. This can be achieved only when the mind dips into the ocean of music and dissolves in it.

Question 3) Find the odd one out in the given list of composers and give reason for it. 1) Subramania Bharathi. 2) Suddananda bharathi. 3) Koteeshwara Iyer. 4) Namakkal Kavignar.

In the given list of composers, viz, Sri Kotishwara Iyer, Sri Subramania Bharati, Sri, Suddhananda Bharati and Namakkal Kavignar , who were prolific composers in the late 19th and early 20th century, all the others, except Sri Kotiswara Iyer had composed patriotic songs. Sri Kotiswara Iyer composed krithis on his ishta devata , lord Muruga and his notable work being “kanda ganamudham” – Krithis on Lord Muruga in all the 72 Melakarta Ragas. He plays a major role in bringing various melakarta ragas, to krithi form thereby giving a melodic structure to what would have become merely scales.