1.) Identify the Vidwan in the picture. 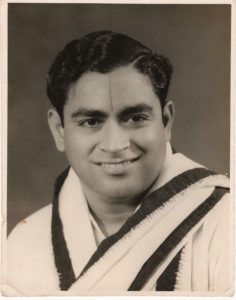 Prof. V V Sadagopan was a distinguished musician-teacher who contributed much to the science and art of music. He was known for his own style of very simplistic and effective approaches of Carnatic music to his students.
He had his tutelage under Namakkal Sesha Iyengar and Ariyakkudi Ramanuja Iyengar.
He was born in Veeravanallur near Kallidaikurichi in Tirunelveli District. Though earlier he took to the talkies, later days he devoted much of his time to carnatic music. One of his hit films was ‘Madanakamarajan’. He was one of the leading performers of his times. Later in life he moved to Delhi where he took up teaching full time and thought many students. He was a graduate and had an imposing personality. Sri MGR makes a reference to Prof Sadagopan in his autobiography ‘Naan En Piranthen’ which was serialised in Ananda Vikatan.
He represented Indian Music in the Centenary celebrations of the Moscow Conservatoire in 1966. He has also composed quite a few songs using the mudra “Seshadasan” besides setting to tune many songs of Smt. Ambujam Krishna and others.

2.) Identify the Artiste and the Raga Rendered. https://soundcloud.com/sukrtam-trust/musiq-14-

Sri DK Jayaraman – A maha vidwan known for his moving rendition of krithi-s, strictly adhering to the patanthram. His rendition of Sri Muttuswami Dhikshitar’s Krithis, are of very high quality in terms of diction as well as in bringing out the mood of the composition and the raga.

Mahaganapate in raga Natanarayani – a composition of Sri Muttuswami Dhikshitar on lord Ganesa of Tiruvarur. The raga mudra is beautifully incorporated in the samashi charana “mahA natanArAyaNi nandana”. The swarakshara ma ga (maha ganapate) is beautifully incorporated in the beginning of the composition. The downward glide from sa to pa and sa to ma are very characteristic phrases for the raga Natanarayani which manifests both in the krithi and the chittaswara.

Sri Muthuswamy Dikshitar has beautifully describes the details of the locations and the Kshetras in the Kritis mentioned.

In the Kriti Sri Matrubhootam – he refers to the “Thayumanavar Swamy” at Rockfort Trichy in the line “Vaishya Jaathi Stree Vesha dharanam”. The whole Kriti is composed on this deity at Tiruchirapalli town.

In the Kriti Sri Vishwanatham – he mentions the line ” Shripuranirthi Baga Gartha Theera sthiratara” which is like a GPS location to the temple in the village Kuzhikarai in Thanjavur District. “Gartha” referring to Kuzhi (pit) and “Theera” referring to karai (shore/riverbanks)

In the Kriti Meenakshi Memudam dehi – he mentions the line “Madhurapuri Nilaye” referring the kshetra in the town of Madurai. It is said that Sri Dikshitar asked his disciples to sing this Kriti, at the end of which he attained mukthi.

In the Kriti Chintaya Makanda moola kandam –
He refers to the Sthala Vruksham which is a Mango tree as “Maa Kanda” and the deity in Kanchipuram is also refered to as mamoola naathar.

In the Kriti Sri Rajagopala – he refers to the kshetras location in the lines “Haridraa naditeera” and “Dakshina Dwarakaapuri Nilaya” which is a direct reference to Mannargudi Rajagopalaswamy temple.