Question 1) Identify the Mridanga Vidwan in the picture. 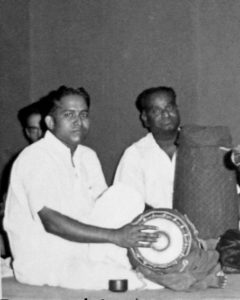 Vidwan Sri Guruvayur Dorai is one of India’s senior-most living exponents of mridangam today. Having had his initial training under Vidwan Palghat Subba Iyer and Vidwan E.P. Narayana Pisharody, and later from the legendary Vidwan Sri Pazhani Subramanium Pillai , Sri Dorai had carved a new style for himself as an accompanist. Initiating his concert performances at the tender age of eight, Sri Guruvayur Dorai has performed on the concert platform for the past 60 years and has accompanied all the stalwarts of his times. Apart from being a successful performer, he has been a very respected teacher and has been invited as visiting faculty at various universities across the globe.
His has produced numerous students who are a keeping up to his style of playing and are very successful performers of today.
Inspite of being such a great artiste, his humility and modesty is something which cannot be described in words. His simplicity in mingling with people makes him a very loved human being by everyone around him.
The lesser known side of Sri Guruvayur Dorai is that he is also a vocalist par excellence and has given a few public performances too.. Here is a link to his beautiful rendition of Bilahari..
https://youtu.be/SYYSpeVCg7A

Question 2) Identify the Ragam rendered in the clip from the following link. https://soundcloud.com/sukrtam-trust/audio-15

Ragam Sivashakthi – a creation of Sri GN Balasubramanian, is a unique raga. It has only four notes in its ascent (SA GA MA DA) , as opposed to the traditional pentatonic arohana. The raga has the notes of Kharaharapriya mela. In the composition Sri Chakraraja Nilaye the raga mudra is incorporated in the line “Sivashakthi Aikya Rupini”. Veenai vidwan Sri S Balachander described the concept behind the scale – 4 notes in the ascent depicting the 4 isosceles (upward) triangles that represent shiva and 5 notes ( S N D M G) in the descent depicting the 5 isosceles (downward) triangles depicting shakthi in the Sri Chakra. Hence the name Siva Shakthi and the composition beginning with Sri Chakra Raja nilaye. Sri GN Balasubramaniam was a Sri Vidya Upasaka himself.

Question 3) Connect the images given below. 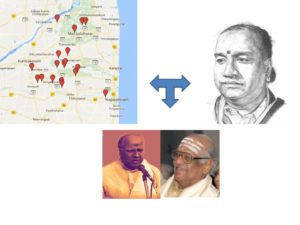 Sri Semmangudi Srinivasa Iyer – learnt from Semmangudi Sri Narayanaswami iyer , Tiruvidaimarudur Sri Sakha Rama Rao , Sri Umayalpuram Swaminatha Iyer and Maharajapuram Sri Vishwanatha iyer. Such a vast repertoire and years of listening to greats made Semmangudi mama what he was. He still lives in the hearts of many as the Sangeetha Pitamaha.

Here is a short documentary made on Sri Semmangudi mama where he shared many things about his journey in the world of music. It is a must watch video, that will leave us humbled before this great artist and the ever greater ART.