Question 1 – Find the 5 Mudras hidden in the picture below. Give the respective composers’ name. 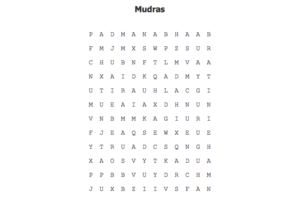 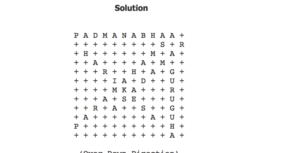 Disclaimer : We have received some other answers for the word search also. But these were the known/popular composers’ mudras we were looking for. We salute and place our pranams to the other greats.

Question 2 – Find the composition and composer from the audio below. https://soundcloud.com/sukrtam-trust/vocal-musiq-13

Answer – The composition is Amba Nannu Brovave in the Ragam Thodi and the composer of this composition is Sri Anai Ayya.. The clipping was a rendition of the Kriti by Sangeetha Kalanidhi Sri B Rajam Iyer.

Anai Ayya brothers were two sibling composers – Anai Iyer and Annavaiyyar who composed together both in Telugu and Tamil and used the mudra Umadasa.
The Anai Ayya brothers were close contemporaries of the great composer Tyagaraja and were related to Maha Vaidyanatha Iyer. They lived in Vaiyacheri and later in Tiruvaiyaru. They were patronised by the king Serfoji II of Thanjavur. Together they wrote at least 26 Tamil and 12 Telugu compositions that are currently available and Their songs were in praise of Siva and his consort.

Some of their other popular compositions are Paruvam parkka (Dhanyasi) and Mahima teliya tarama (Sankarabharanam).
Sri T. Viswanathan and T. Sankaran worked together on publishing the notated compositions of the Anai Ayya brothers.

Answer – “Unnai thudhikka arul thaa” – in the Ragam Kunthalavarali set to Adhi thalam was the the first ever krithi of Sri Papanasam sivan.

It was a spontaneous expression of this great composer’s bhakthi at the Rathotsavam of Sri Tyagaraja Temple , Thiruvarur.
The composition highlights all the beautiful important aspects at thiruvarur temple like the Kamalayam, ajapa natanam, etc.
The very first line of the Kriti brings out the Raga swaroopa of Kunthalavarali so beautifully and elegantly. Similar to the compositions of Sri Thyagaraja, where the Saint brings out the entire Raga swaroopa in the Pallavi of the Kriti itself, especially in his ekaika raga Kritis and Kritis in other lesser handled ragams. Sri Papanasam Sivan also brings out the beauty of the raga swaroopa in the Pallavi of this Kriti itsel. It was one the reasons why he was also called “Tamizh Thyagayya”