Question 1 – Identify the Musical Instrument given in the picture below. 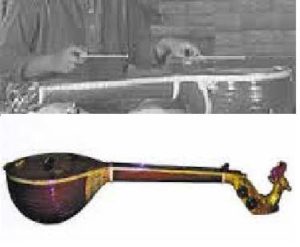 A stringed percussion instrument of South India , which resembles a thambura /gottuvadhyam . It’s played using two bamboo sticks. It has very much been a part of music concerts in South India. The instrument is still played in the avudayar temple (ambikai- koyambikai) shrine. Avudayar kovil Harihara Bhagavathar was a very famous gethu vadhya vidwaan. Sri Avudayar kovil subramaniam, son of Sri Harihara Bhagavatar is also an exponent of this instrument and is a torch bearer of the tradition.

Harikeshanallur Sri. Muthaiyah Bhagavatar was a lakshana lakshya vidwan, a vaggeyakara and a harikatha exponent . Though he was a very prominent performing harikatha vidwaan, his contribution to the practical music world is phenomenal.

He was one of the greatest composers of his times and has composed Kritis in Sanskrit, Telugu, Tamil and Kannada. He used the Mudra “Harikesha” in his Kritis.

As a composer he has created many vakra ragas (zig zag ascent or descent) as well as krama ragas (straight forward ascent or descent).
Ragam Niroshta (meaning – lips not closing) is a creation of Sri Muthiah Bhagavathar. He has created the raga without the notes “ma,pa” which are only notes which make the lips touch each other while singing. Interestingly the Kriti Rajarajaradhite is composed in such a manner that the Sahithyam consists only of non-lip closing words.
His compositions in traditional ragas also have a new approach. The krithi maanamu kavalenu thalli in ragam sahana starts with a swaraksharam “ma” which is a very novel approach to sahana and brings out a beautiful aspect of the raga right in the beginning.
He has also composed group Kritis like the Chamundeshwari ashtotra krithis and the Shivaashtotra Kritis.

As a musicologist , the sangeetha kalpadrumam was a major contribution of Sri Bhagavatar. The work contains his assimilation of other great works starting from Sangita ratnakara of Sri sarngadeva to the music that was practised during his own time. It talks about various grammatical as well as practical aspects of music like voice production etc.,. Only Part 1 of the Sangita Kalpadrumam is available now.

In the book naa kanda kalavidaru Sri vasudevachar says “no one would return empty handed from Muthaiyah bhagavatars house but would acquire some valuable piece of information” such was his large heartedness.

He played a major role in the development of musical activities and discourses at the Music Academy Madras. He headed the Swathi Thirunal Music College Trivandrum for a long tenure.

Question 3 – Identify the ragam in the clip given below?
https://soundcloud.com/sukrtam-trust/audio11

Garudadhwani – one of the ragas from Tyagaraja’s big bag. It is a janyam of shankarabharanam with a sampoorna arohana and a audava avaohana omitting Ni and ma . On a lighter vein the scale of Garudadhwani is the opposite of Bilahari’s scale. The famous compositions of Tyagaraja in this raga are ananda Sagara and tatvameruga tharama. Various vidwans have handled this raga from various angles. One very distinct beautiful rendition by Vidwan Sri TK Rangachari is given below.