Muhana Prasa Antyaprasa Vyavastha is a small treatise that deals with Shabdalankaras in musical compositions. The rules regarding the first syllable/second syllable/last syllable rhyming are explained with copious examples.

2.) Find the names of two great Vidwans (percussionists) from the picture below 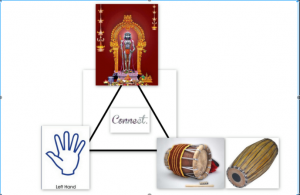 Both of them are left handed percussion vidwans. Pazhani is the common word for both of them. While Sri Subramania Pillai was born in a family of Tavil Vidwans (Father – Sri. Muthaiah Pillai), he took up to mridangam for domestic reasons. However that turned out to be a big boon to the carnatic music world.

Haridwaramangalam Sri AK Pazhanivel also hails from a family of tavilkaras and the Carnatic music world is fortunate enough to be listening to this great Vidwan even today.

Smt Kishori Amonkar is a traditional hindustani classical musician who belongs to the Jaipur gharana. She trained under her mother, Smt Mogubai Kurdikar. She is known for her very classical style and a very solid voice. She is a no nonsense musician who believes in hours and hours of riyaz/practice. She is very much appreciated for the khyals and thumris.